Traditionally, OSD installers have heavily relied on ‘block and slab’ solutions to build On Site Detention tanks and systems.

In the ever-changing landscape of the construction industry, it is becoming increasingly difficult to keep on top of all the changes and innovations that the industry is delivering on a daily basis. Particularly when it comes to essential site systems such as Onsite Stormwater Detention. In this area of construction, we have seen many leaps and bounds over the past 5 years, predominantly in relation to the use of a pre-cast model versus a traditional ‘block and slab’ built on site approach.

The pre-cast method for stormwater detention is a relatively modern concept that was developed in response to the pitfalls of the more traditional method of a block and slab. A pre-cast solution offers many advantages and these include: 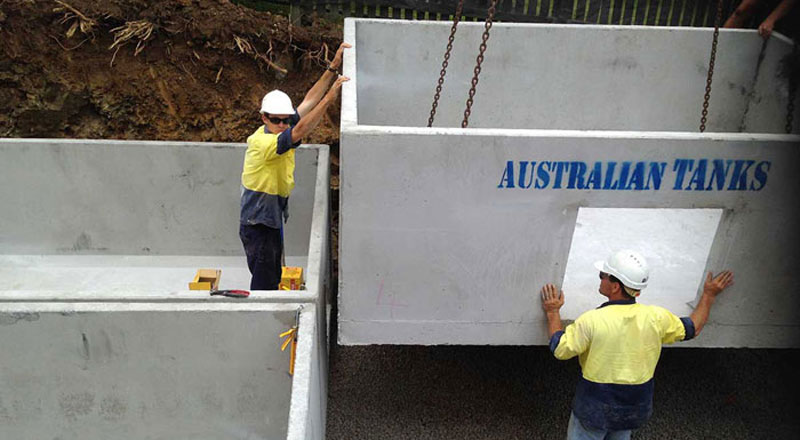 ​“The biggest thing for us is the minimal down time required onsite for access and installation. We can put in a huge 250,000 Litre system in just 3 days versus potentially 4 - 8 weeks of down time, sometimes longer.”

Aaron Glowka, a business owner who heads up Impact Civil and works with one of Queensland’s largest construction companies agrees with the above sentiment and advantages. “The biggest thing for us is the minimal down time required onsite for access and installation. We can put in a huge 250,000 Litre system in just 3 days versus potentially 4 - 8 weeks of down time, sometimes longer.”

“The massive difference in time frame allows us to deliver completion far quicker and at a substantially reduced cost than if we were to go with a block and slab. We are able to move on to the next part of the contract or to the next job altogether. Anything that creates a time efficiency should be looked upon favourably as it allows for a better return on all jobs.”

When questioned on the workplace health and safety benefits associated with a pre-cast tank, Mr. Glowka commented, “Safety is a big one for us as well, we don’t have to have or manage confined space works happening because it’s all pre-made and as you don’t have anyone physically working or spending time inside the actual tanks when the lids are on, you get to minimise a lot of safety hazards. It also minimises issues that may arise through construction for the actual tanks because it’s a pre-engineered product, versus building a site specific product that could encounter a variety of site specific problems.”

All too often, the industry sees Project Managers or Contract Administrators assessing costs during the planning phase, but fail to take into account the real costs associated with a pre-cast system versus a block and slab. When building a detention system onsite, you will need to rely on a number of additional contractors to complete the work. This means you are left to deal with additional trucks, raw products and materials, additional safety inductions and much more time spent on safety plans. All of this additional work and management takes time and ultimately costs the developer money - most of which is not generally included in the building plan or cost comparisons however is a very important element that should be considered.

Another main issue that is often forgotten about, is the safety issue surrounding an open excavation for long periods of time. Such holes can be susceptible to weather events or cave-ins, not to mention areas being cordoned off from access for safety reasons. All of these things can also lead to a greater chance of delay, more costs and more inefficiencies – especially when tanks are installed in often used driveways or main thoroughfares.

“Cost wise, personally I’ve worked it out to be the far more favourable option when all things are considered such as materials, labour, safety and time. It’s far more economical and there are many more savings to be made, particularly when you include saving time on the end product, which ultimately means a savings on holding costs and interest repayments on the build of the structures or buildings themselves,” said Mr Glowka. “As a business, we’ve decided pre-cast has to be the only way to go for Onsite Detention.”

The pre-cast method is also extremely versatile and can be used for all types of developments, from small scale right through to large commercial projects. Michael Spiller, a civil engineer and the Inventor of the Parthenon Detention System, operates in predominantly large scale environments with a focus on tanks over 150,000 litres. Mr. Spiller highlighted that the three main benefits for a pre-cast approach are safety, time efficiency and cost savings.

“It's far easier to control all the safety components of a project in an environment like a factory and then bring the product onsite, versus having an open hole, usually a very large one, where lots of different contractors and equipment are being worked on simultaneously. Using a block and slab method is not ideal from the workers perspective. It’s a much more preferable option to be in a predictable environment where possible.” 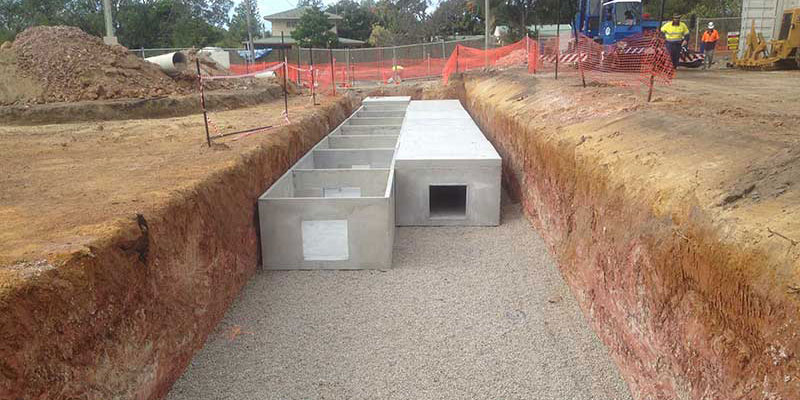 “Maximising improvements in the industry and site efficiency is paramount. A pre-cast solution takes it to the next level. As an example, a large project could mean 3 - 4 months of onsite work and construction at least. If a pre-cast solution is used, the entire site can continue on with work as normal with no interruptions while the tank is manufactured off site and then when ready, only takes about 2 weeks to install and another week on top of that to finalise. Altogether, it creates a significantly more efficient site plan as a whole and frees up the project managers elsewhere. Not only does this save time and money for construction, but because the project can launch earlier, that means there is extra time where the developer can generate extra revenue because of the saving in time. The flow on benefits are huge.”

Mr. Spiller went on to discuss the biggest challenge for the industry ahead, “Often appointed contractors look for the cheapest product or upfront quote, rather than thinking of cost savings in the bigger picture. The pre-cast solution is more cost efficient in the long run so that’s what we need to educate the industry on. Pre-cast is definitely the way of the future. The only reason people are still using block and slab is because they may be behind the times.”

Les Green, MD of Australian Tanks, developed the modular detention systems within Australian Tanks range and outlined that the modular 7kl and 12kl tanks came as a direct result of need. “We had many contractors and engineers asking us to develop a system that was simple and quick to install and offered massive time savings. Our product that allows cost effective detention tank systems from 7kl to around the 250kl mark was in direct response to a gap in the industry.”

Are you sure you want to delete this address?